Orange OR 120 Service and Repair 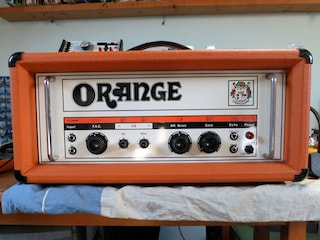 Early 70s OR 120
Here is a very fine amp indeed, and a very heavy one too.  It's also been looked after very well since it's manufacture in the early 70s. The owner complained that it was "farting out" at around 1/3 volume.  It was a horrible crackling sound that just couldn't be ignored.  Another thing of note was that the transformer hummed quite loudly acoustically, although there was very little hum from the loudspeaker. 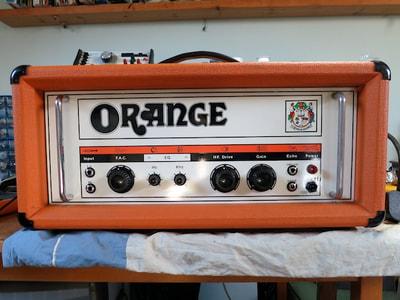 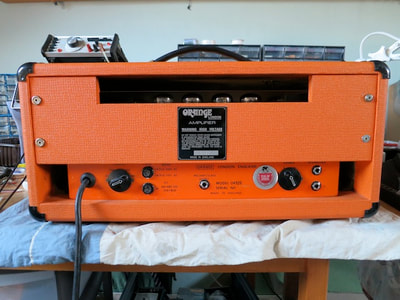 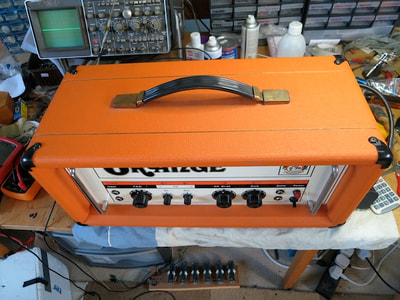 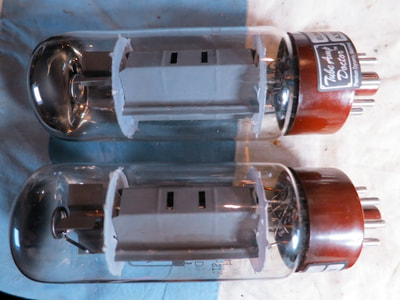 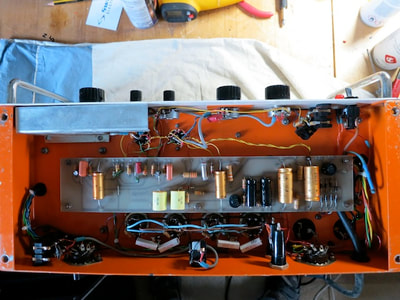 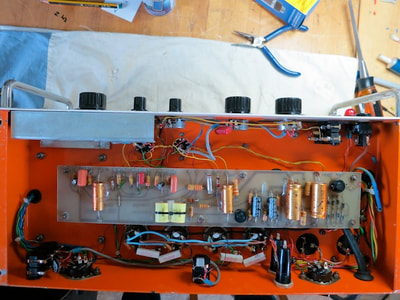 On visual inspection, all the components looked good.  I did find a broken effects send jack socket, a loose pot and some loose transformer bolts and components riding high on the board supported only by their long wires.  After measuring all resistances, the electrolytic capacitors were tested.  The pair of black ones in the bias circuit were found to have very high ESR of around 6 Ohms.  I always disconnect one end and re-measure before condemning electrolytics because sometimes, the meter can give a misleading reading, even though it's designed to test in-circuit. In this case the readings were both the same.

I was surprised these caps were bad because they had recently been replaced, along with the main filter caps.  Although marked with a well known brand, it turns out they were Chinese in origin and of poor quality.  The stability of the bias supply is vital to tube life, so they were replaced with good quality ones.  The main filter caps have been left for now as amp is pretty quiet, they stay cool and look fairly new, but I have a feeling they may get changed soon.

While the board was out, I replaced the two 220k grid leak resistors which supply the bias voltage to the grids of the power tubes, as they were different.  All the solder joints were inspected and a few reflowed, especially the ones holding some of the heavier components that were not resting flat to the board.  Hot glue was added to fix the "flappers" down so they would not be affected by vibration.

I had already determined that one valve had suffered from red-plating and another had lost virtually all of it's getter, indicating a partial loss of vacuum.  Another EL34 was barely conducting.  To be sure, all the valve holders were cleaned and retensioned to ensure there was no intermittent contact.

The second pre-amp tube physically rattled and was replaced.  V2 has quite a hard life in this circuit, as the second triode, a cathodyne PI, has its grid directly coupled to the plate of its partner triode, i.e. no capacitor to block the HT.

With all the valves out, the bias voltages to the tube sockets were checked and adjusted up to the maximum before inserting the new set.

The effects loop had a new jack socket fitted twice, as the new socket, being slightly wider, wouldn't quite fit. The assembly had to be  dismantled and the sockets switched over to allow the threaded ends to be flush with the holes in the fascia.  What a faff!

The new matched quad of JJ EL34 were installed and biased sensibly for testing.  After a warm up period and close monitoring of current draw through probes, the amp was gradually run up to full power through a 16 Ohm dummy load connected to an oscilloscope.  The sine wave was looking a bit bent so the bias was warmed up a bit to take out the crossover distortion, but it was still kept at a very safe level.

There was no hint of misbehaviour, strange noises emanating or ugly waveforms on the oscilloscope, so it's regarded as fixed.  I'm not sure what was causing the strange farting noise.  I never heard it, but it could well have been oscillation due to badly matched and failing power tubes, or that rattly preamp tube.  However, a god service and replacement of failing components usually sorts things out.  The owner was worried it might be a transformer problem but in my experience that is very rare.

Testing through a speaker revealed a clean and fat sound, and the with my copicat in the efects loop, I had a lot of fun for half hour or so.
I always double check everything and monitor with the amp on for a few hours before deciding it's ready to leave the lab.

The next evening the amp was picked up and taken straight to band rehearsal, where it was put through it's paces and cranked through a power-soak.  Andy the owner e-mailed back as asked saying this:-

"I think we’re all good. It seems a touch louder than before, and fatter. It’s also got back some of the growl that it had obviously lost as it was going awry.  Had about 90 minutes of use, mostly with an attenuator but I did let it off the leash for ten minutes and it held up fine."