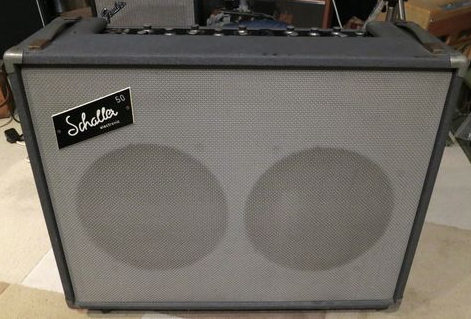 As an admirer of German engineering, I had to have a look at one of these and hear what kind of sounds they made in the 60s.  Unfortunately the echo-sound unit was beyond repair for me, but this particular amp sports a very rare mechanical vibrato unit, which is now working perfectly after a complete stripdown.  I have to say that this Schaller to me has one of the most beautiful clean tones I have ever heard, at least with a Strat, and is definitely in the early JMI / Vox area, only better.  I was a little shocked at the rusty chassis at first,  but in the end itproved to be superficial, and the quality of the components and construction means the amp itself only needed 6 resistors replacing, a new mains lead and a couple of valves to have it working nicely.  Obviously a good deal of cleaning, diagnostic testing and servicing was required, and with only the help of a schematic that did not include the EF86s and other components contained here, it was quite a challenge. The switches were intermittant and the fibre backs needed a little light oil to swell them enough for the contacts to be made.  They work very well now and add to the charm of a very interesting control panel.

I would be delighted if anyone could send me the correct schematic!  I'd love to get the echo working and the Bass and Micro channels are a bit quiet.  Also the screen resistors are a mere 100 Ohm.  They should really be changed up to 1k in the future and I think the decoupling caps from the PI are also a bit leaky causing the fixed bias to wander at higher volume, and causing hum.  However, as the cicuit is original, I would prefer to use the exact replacement ERO FOLL ll caps if possible. 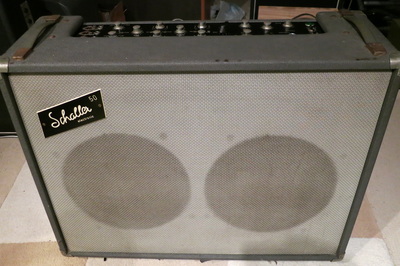 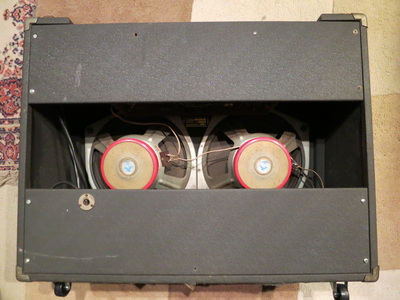 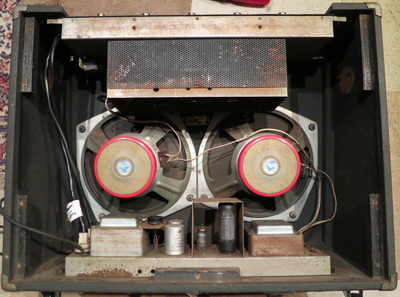 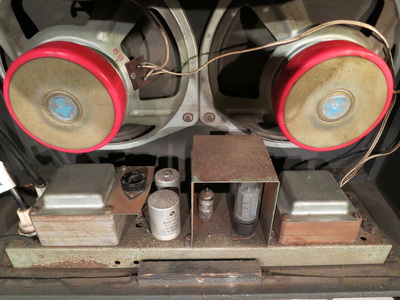 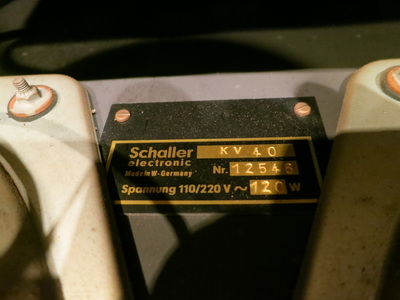 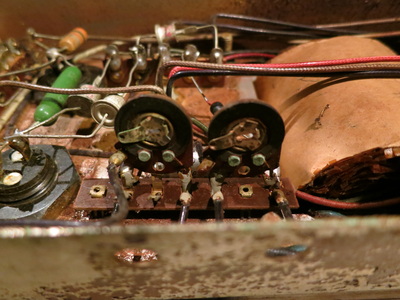 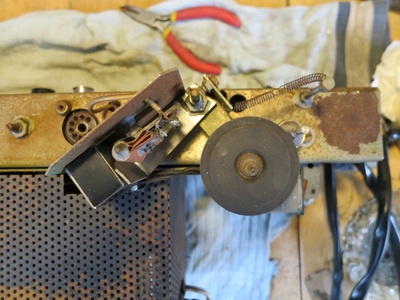 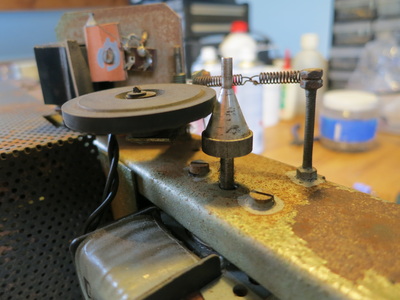 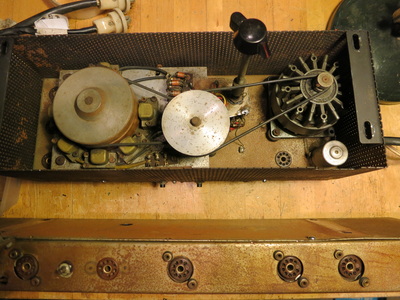 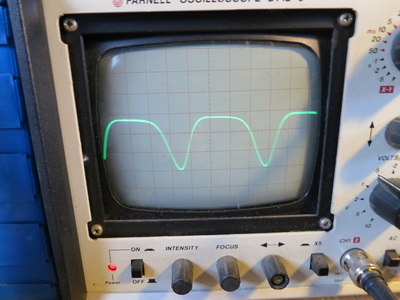 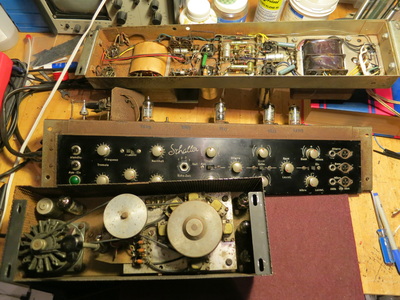 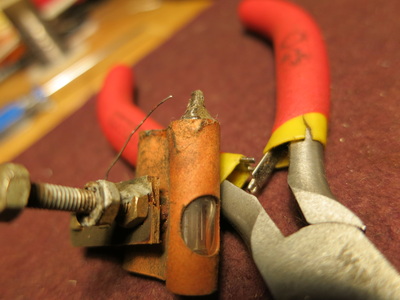 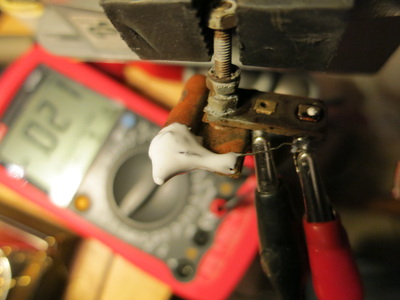 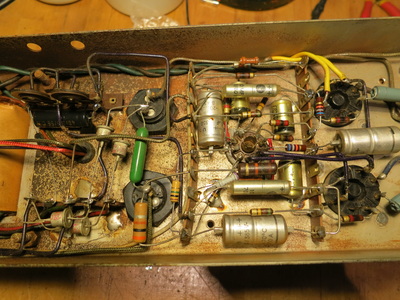 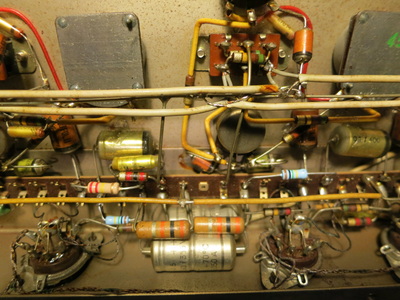 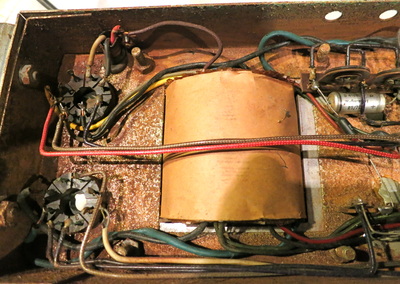 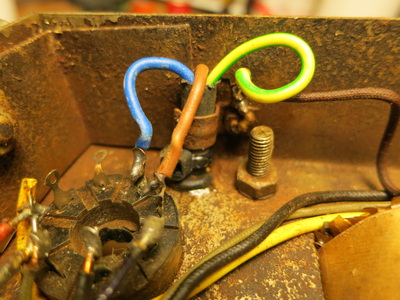 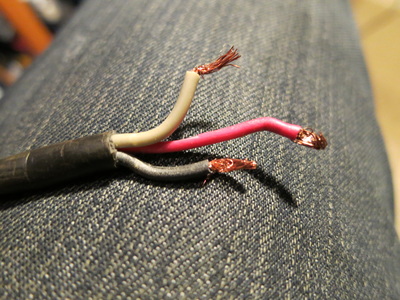 Some final shots after another good scrubbing up with Flash, some new screws and washers, and you get the impression of a high quality, expensive, professional amp.  I believe this to be one of the first KV 40s with mechanical tremolo and EF86 preamp valves, produced around 1963/64. A year or so later and they were all ECC83 preamp valves and a standard tube oscillator for the tremolo. Finaly in around 66/67 the preamp became transistorised and the KV50 appeared.  I have left the Echo unit out for now.  It probably needs all the heads replacing and is just dead weight in an already heavy combo. 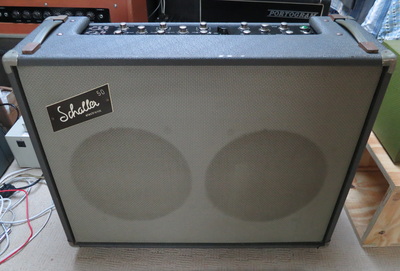 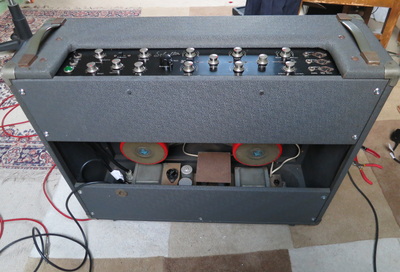 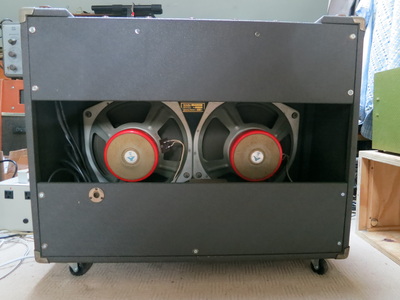 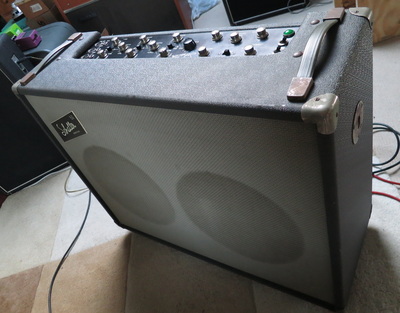 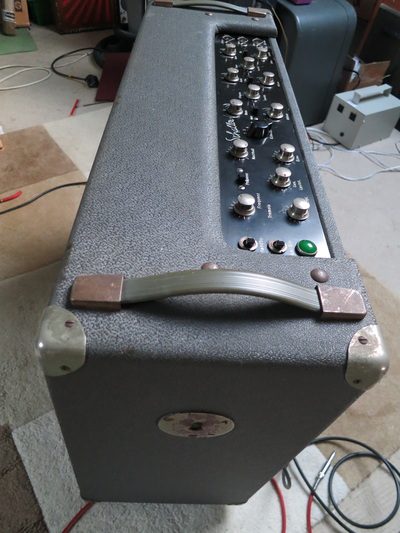 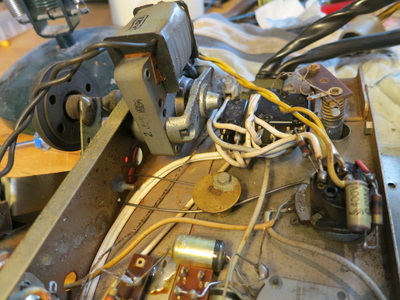 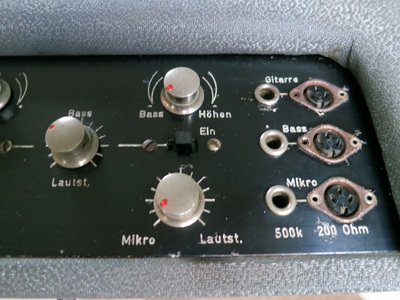 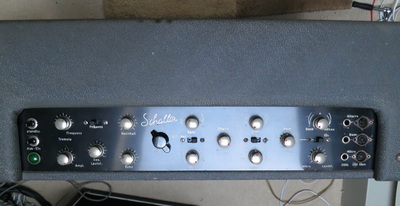 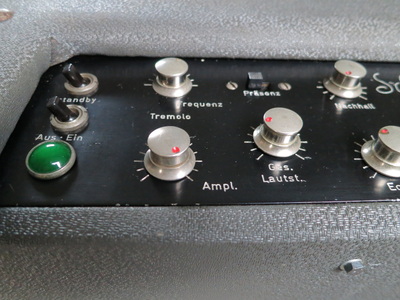 Update. 22/05/15
The tremolo is now working great and the rattle has gone.  Screen resistors upgraded from 100 to 1000 Ohm with no audible change in tone or volume.  The PI signal caps were bad and were replaced with the same value but higher voltage ones.  The hum has gone and the bias voltage stays constant.  A couple more resistors were replaced.  One EF86 was a bit microphonic so a NOS Mullard was put in. The Bass cannel is now as loud as the Guitarre chanel but with a bit more...

The main filter caps 100 + 100uF and a 50uF were tested and found lacking, so were replaced with specially imported F&Ts from Germany.  The amp is virtually silent now.  The black rubber rings on the controll knobs  were replaced with black shrink wrap (you can't tell).  The knobs were also given a very good buffing.